From Black robe to Kurta-pajama 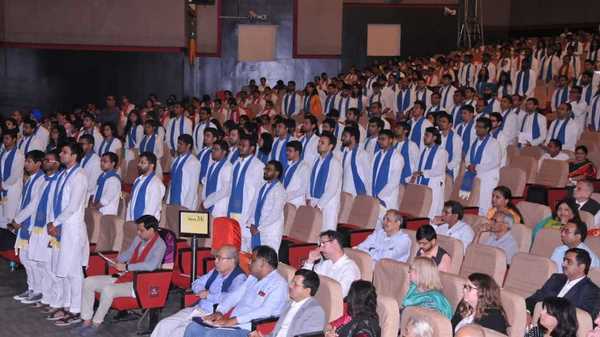 Taking pride in being Indian is one of the things we all are endowed with but being able to break those colonial black robes and celebrating it too is another.

Back in 2017 Ditching the ceremonial and "colonial" black robes and headgears, IIT Kanpur students donned the ethnic attire of kurta-pajama and kurta-salwar during their convocation ceremon

"For the first time, students received their degrees in the Indian Institute of Technology (IIT), not in the British-time gowns and headgears, but in kurta pyjamas (for boys) and kurta-salwar (for girls) along with stoles in different colors to mark their specific courses," IIT-K Director, Professor Indranil Mana said, in his statement made then.

It was even added “There will also be no need to wear black leather shoes. Students will be free to go in for Indian footwear in leather.”

Taking over this trend to 2019, UGC had recently asked vice-chancellors of all universities to adopt 'ceremonial robes made out of handloom fabrics'

This was recently observed at the 57th convocation of IIT Bombay where students ditched the ceremonial black robe and headgear, decided to go traditional with white kurta-pajama.

Additionally, Nandan Nilekani the co-founder and chairman of Infosys was conferred with an honorary doctoral degree, who is also an alumnus of IIT Bombay. He said the five years he spent at IIT Bombay were a defining experience for him. He said he strongly believes in giving back to society and in making sure that the next generation of students has better opportunities.

Recently, the University Grants Commission had asked the vice-chancellors of all the universities to adopt "ceremonial robes made out of handloom fabrics which would not only give a sense of pride of being Indian but also be more comfortable in hot and humid weather".

The Union Minister of Human Resource Development, Ramesh Pokhriyal 'Nishank' was the chief guest at the event.

He said education is a 'weapon' which can transform the lives of students, their families, and society, and IITs have an important role to play in the goal of establishing India as the world leader in education within the next five years.

The Minister added that culture should be joined with education so that the individual has an enduring and firm foundation for growth. He exhorted the students to "bring light where there is darkness anywhere in the world".

Later, the Minister awarded degrees to 2,603 students besides 385 PhDs, two joint PhDs of IIT-B/National University of Singapore and one Cotutelle Ph.D. (Joint Supervision) agreement with the University du Quebec a Trois-Rivieres in Canada.

Pokhriyal also congratulated IIT Bombay for being ranked among the Top 200 in the QS World University ranking and asked it to "aim higher" as it can contribute significantly to challenges of climate change and goals like increasing India's renewable energy capacities.

He also held a live interaction via National Knowledge Network with students of all 23 IITs in the country on the subject of 'Navbharat Ka Nirman, IITs Ke Saath', inaugurated Hostel No.18 at the campus and planted a sapling.

Well, all these events and these new changes which took place at the IIT Bombay convocation were surely a great move to show that India is trying to develop in every field it could and solve as many future problems with the help of the new generation mindsets and capabilities.

India back to Moon Strength of the perennial monsoon rains now... Virology the rising stream. Celebrating the rocket lady behind the launch... Redefining biotechnology labs A novel, low cost, hand-held device to detect... 4-year bachelor course is on the list of the... Chandrayan 2: Celebrating the three scientists... Students may soon be allowed to enroll for... ICAR Opens Application Form for Counselling 2019 The “Vedesi PhD to play a major role at... Quality of PhD Thesis for Doctoral Degrees... Two thirds of the PU Phd scholars are women IITs see surge in number of doctoral degrees Government forms separate committee to decide... PhD, Doctoral studies gaining popularity HRD Ministry and UGC Unveil Plan to Promote... Decision on the incentives for Ph.D. students... PhD Mandatory from 2021 DUTA writes to UGC against the rules passed for... Amendment In Admission Rules for Ph.D. Govt exempts IIMs from the regular Ph.D. entry... Strengthening the education system by new measures NET mandatory for fellowship decision by UGC... Ph.D. students strike over fellowship grant Apply for jest.org.in following these simple... Fee structure revision after getting the...