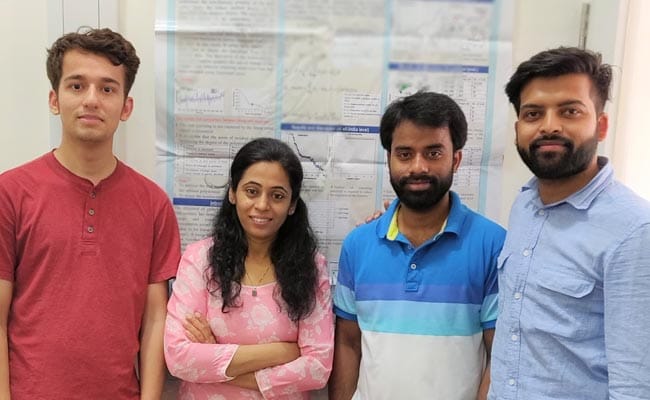 Mandi: Indian Institute of Technology Mandi Researchers have developed an algorithm to process 100 years of data of the Indian Summer Monsoon (ISM) Rainfall. It will also factor in information about global climate phenomena such as El Nino Southern Oscillation (ENSO) and can access periodicity of switching between strong and weak monsoon years.

The research was undertaken by Dr. Sarita Azad, Assistant Professor, School of Basic Sciences, IIT Mandi, along with her research scholars Mr. Pravat Jena, Mr. Sourabh Garg and Mr. Nikhil Ragha of IIT Mandi. The extensively studied the changes in periodicity of Indian Summer Monsoon Rainfall and used the data to predict periodicity in the future.

Their hard work has gotten global recognition as it has recently been published in the reputed American Geophysical Union (AGU) peer-review International journal Earth and Space Science.

Indian Summer Monsoon, the annual cycle of winds coupled with a strong cycle of rains, is undoubtedly the lifeline for India. While the monsoon itself is a stable phenomenon, arriving almost like clockwork every year, the short term fluctuations in the annual rainfall are unpredictable and pose a greater challenge.

With the researchers breathing in ideas to every new possibility, hope that this aids to the betterment of the country.

Dr. Sarita Azad and her team developed algorithms that can accurately detect intense rainfall events, taking into consideration the triennial oscillation period and other factors such as ENSO. For this purpose, Pravat Jena, part of the group, has developed an algorithm to analyze the changes in the periodicity of the Indian Summer Monsoon. It predicts the decreasing intensity of rainfall in most parts of the country, which covers 41% area.

The team examined the spatial distribution of the triennial oscillations using rainfall data of 1260 months between1901–2005. They analyzed the power spectrum of the observed data and showed that the 2.85-year periodicity was present at 95% confidence level over more than half of the 354 grids across India.

Speaking about this research, Dr. Sarita Azad said, “We found that Indian Summer Monsoon Rainfall has a periodicity of 2.85 years, during which the monsoon tends to switch between strong and weak years. This 2.85 year period is called triennial oscillation.”

In addition to the triennial oscillation, the quantum of rains that occurs during the ISM is also connected to global climate phenomena such as El Nino Southern Oscillation (ENSO) that recurs in a 3-5-year period. Understanding the relationship between triennial oscillation, its spatial distribution, and how it is likely to change in the future is important for reliable monsoon prediction.

Mr. Pravat Jena on the significance of their findings said: “A weakened triennial monsoon cycle will have a severe impact on agriculture and water resource management, particularly over the southwest-coastal, northern, and northeast-central parts of India.”

The research team has projected the data into a collaborative framework-based simulation called the Coupled Model Intercomparison Project (CMIP) to ascertain the future pattern of the 2.85 years oscillation. The projections showed that there is a weakening of this oscillation by the year 2100. Explaining the ISM, Jena said, “The ISM involves complex interactions both in temporal and spatial scales. Despite the complexity, monsoon rainfall seems to show a well-defined pattern.”

India back to Moon From Black robe to Kurta-pajama Virology the rising stream. Celebrating the rocket lady behind the launch... Redefining biotechnology labs A novel, low cost, hand-held device to detect... 4-year bachelor course is on the list of the... Chandrayan 2: Celebrating the three scientists... Students may soon be allowed to enroll for... ICAR Opens Application Form for Counselling 2019 The “Vedesi PhD to play a major role at... Quality of PhD Thesis for Doctoral Degrees... Two thirds of the PU Phd scholars are women IITs see surge in number of doctoral degrees Government forms separate committee to decide... PhD, Doctoral studies gaining popularity HRD Ministry and UGC Unveil Plan to Promote... Decision on the incentives for Ph.D. students... PhD Mandatory from 2021 DUTA writes to UGC against the rules passed for... Amendment In Admission Rules for Ph.D. Govt exempts IIMs from the regular Ph.D. entry... Strengthening the education system by new measures NET mandatory for fellowship decision by UGC... Ph.D. students strike over fellowship grant Apply for jest.org.in following these simple... Fee structure revision after getting the...